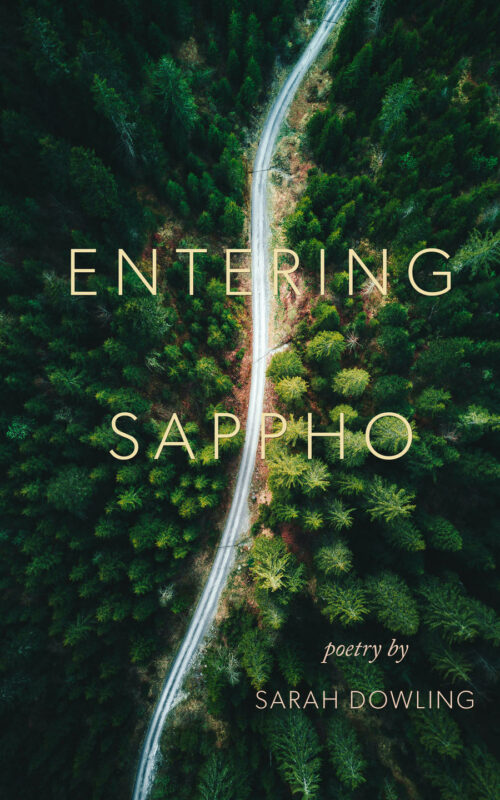 Difficult, also, to rewrite Sappho at this juncture, but the long sequences in Entering Sappho are Dowling’s (relatively successful) attempts to do just that. Conceptually entering the space of Sappho, WA, the poet’s reflection bifurcates, exploring both the sensual poetics of the writer and a contemporary colonial landscape, its name reflecting the prominence of European culture in settler life. Often, these two paths meet and intertwine. In the first long sequence “Clip,” for example, Dowling pairs the yearning of Sappho’s odes with a contemporary, rural setting: “What girl wants to live in nearness / to fishing? What country girl is un- // spoiled nature?”

There’s a meditative quality to Entering Sappho, a centrifugal movement that emerges as Dowling reinterprets and remixes her understanding of both the geographical and the literary Sappho. So proceeds “Soft Memory,” my favourite poem in the book, a sequence quickly identifiable as a rewriting of Sappho 31 (her “Ode on the Beloved”). A poem that has invited translations and imitations since antiquity, Sappho 31 is written in the voice of a woman who watches with envy as her beloved—another woman—flirts with a man. Dowling’s version employs repetition, paraphrase, and amplification to extend Sappho’s one-page poem to a multi-page work. Composed via intermediaries, namely French imitators of Sappho, what this piece adds to the original and its legacy is voluptuous, expansive movement, a back-and-forth and a circling around the lines it has borrowed.

For Dowling, the figure of Sappho has political resonance. The queer settler poet and the queer settler persona(s) of these poems must reckon with the implications of their model, a queer icon (specifically, an icon of lesbian writing), and a distinctly European icon. Like a microcosm of ongoing discussions about racism within white queer culture, Entering Sappho celebrates the legacy of the Greek poet while interrogating the prominent positioning of a Eurocentric canon.

Annick MacAskill is a poet based in Kjipuktuk/Halifax, part of the unceded territory of the Mi’kmaq. She is the author of two collections, No Meeting Without Body (Gaspereau Press, 2018), nominated for the Gerald Lampert Memorial Award and shortlisted for the JM Abraham Poetry Award, and Murmurations (Gaspereau Press, 2020).