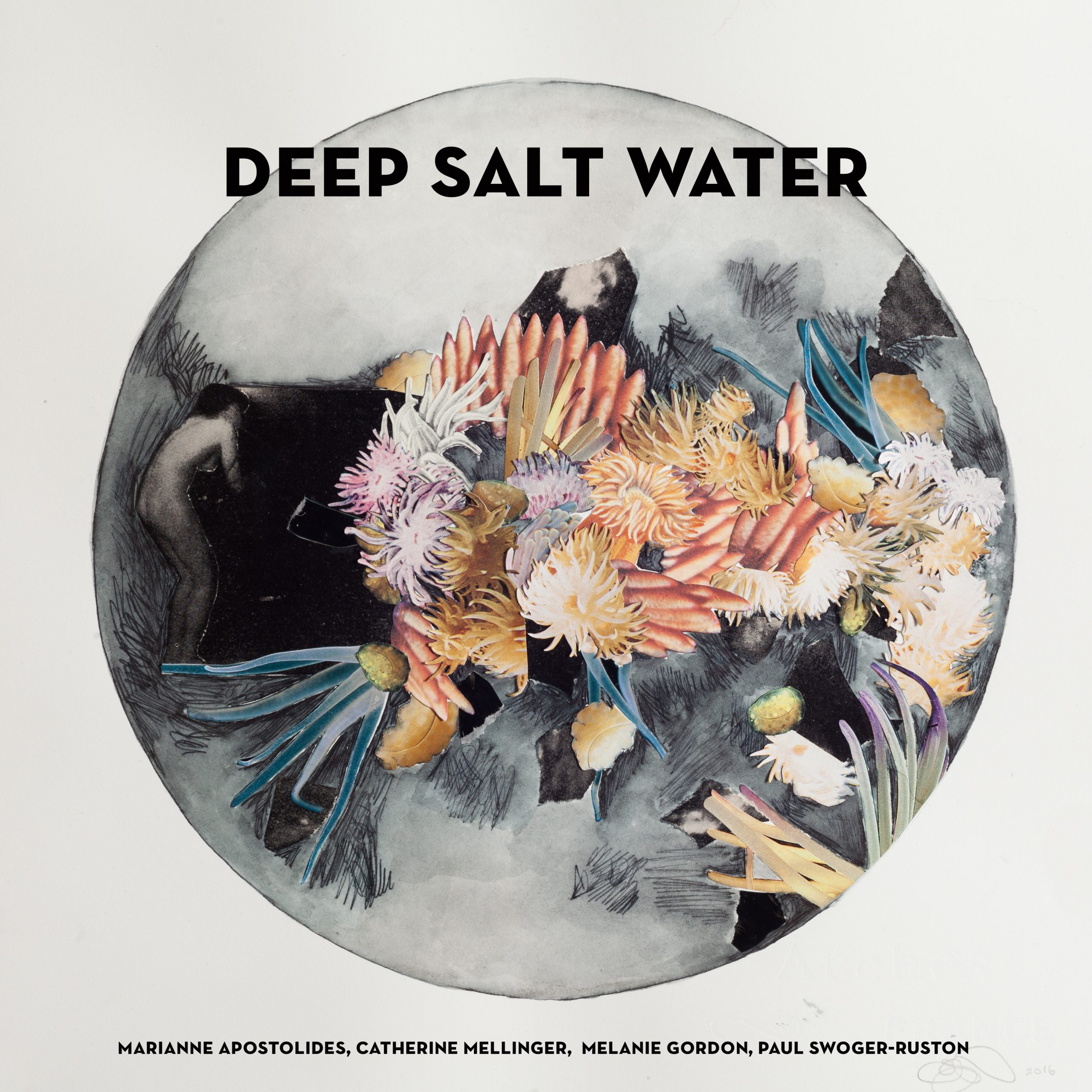 Following the success of the first two months, Room is pleased to bring you the third installment of the captivating and thought-provoking Deep Salt Water, an interdisciplinary collaboration among four artists—author Marianne Apostolides, collage artist Catherine Mellinger, photographer Melanie Gordon, and composer Paul Swoger-Ruston—based on the forthcoming book by Apostolides of the same title.

In Month Two, Apostolides introduced the book’s thematic aesthetic. Environmental issues coalesced with personal narrative to explore notions of time and desire, loss and beauty, and language and its rhythms in the body, all within a single scene at Timothy Leary’s birthday party!

“Mama, where does the ocean come from?”

I’d teach you. He taught me. Not oceans, but lifetimes. We met at a conference. I flew home the next day; he gave me a lift in his rusting truck. In the holders for coffee were cores of apples: two of them, a pair of hunger. Perched and sitting side-by-side. I strapped my belt—but his key fumbled.

“Are you sure you have my number?” he asked.

“Mama, where does the ocean come from?” We live in Berkeley: a little house, a little life. It wasn’t mine. My life was yours. But you escaped, so I wrote books. You loved the marina, just like your dad. He used to run each afternoon. Now he owns dogs.

“I’ll swim to China!” you would’ve said. You’d point to the sea and kick your legs.

He’s fierce that way. He’s loyal. I killed him.

Tracy Chapman sits on a stool and sings a song. Her voice is mournful, or maybe it’s me. The car is fast. He drove a truck. I climbed aboard and spotted the apples. I felt the temptation to sneak the fruit, to place its curve against my lips. There was a moment. Maybe we could’ve. He held my hand but didn’t speak. I turned toward him; he was watching the screen. She sat on a stool. No one was crying, not even the babies. The carpet was green. The children were reading with mothers and aunts—all except one boy, who stared at us. A heavy gaze. Each time I glanced in his direction, that boy was still staring. The ceiling was low. The boy was alone. We were given a number, like at a deli.

“But how is the ocean made!”

I always forget the tenacity of children. Single-minded, one thick root that’s hard to hack. The snags of detail not yet formed. They scraped you out. They came and went. One man, two women: chatting while I lay on the table. They say it’s suction, but I felt scrape. Tenacious child. Then the sound. ‘I understand,’ I heard myself think. It’s the sound that’s suction—a motor, a vacuum—it’s almost as if I’m cleaning the kitchen. “You make such a mess,” I chuckle softly. I shake my head. I vacuum the crumbs as I talk to myself because you’re not here. You’re at the marina with your dad. Good thing, I think. Now I can tidy up in peace.

I’m sorry, sweetie. I know the answer. I shouldn’t have waited. We met at a conference. He’s such a great teacher. It’s caused by collision: the comets and asteroids smashed into earth. They were rich with water. Or maybe it’s caused by volcanoes.

This month’s images are from Anemone, a mixed-media collage by Catherine Mellinger, macro-photographed by Melanie Gordon.