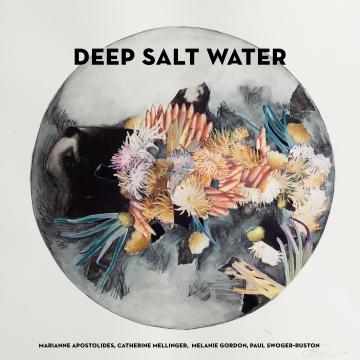 Back again for Month 4, Room is proud to feature the intensely visceral and thought-provoking Deep Salt Water, an intimate memoir about the totality of abortion as human experience. Here we present to you Month 4 of Deep Salt Water, an interdisciplinary collaboration among four artists–author Marianne Apostolides, collage artist Catherine Mellinger, photographer Melanie Gordon, and composer Paul Swoger-Ruston–based on the forthcoming book by Apostolides of the same title.

Back again for Month 4, Room is proud to feature the intensely visceral and thought-provoking Deep Salt Water, an intimate memoir about the totality of abortion as a human experience. Given the recent political changes in the United States, Apostolides was initially hesitant about going forward with the online publication of this piece. She worried that the implications of her writing, namely that “women feel guilt and grief at what is a rather violent surgical procedure (as most surgical procedures are),” might be used to support the opinion that a woman’s right to make choices about her own body should be revoked. Apostolides and Room magazine are passionately committed to a woman’s right to choose, which, it is fair to say, may once again be coming into question in the United States with the possibility of Roe v. Wade being overturned.

Apostolides maintains that her work, which explores one woman’s experience of abortion through the language and imagery of the ocean, “implies that we need to remain aware of the intensity of this act, and that through this awareness we arrive at a deeper sense of wholeness.”

She explains: “I felt grief, I felt guilt—not only because an anti-choice protestor said such vile things when I stepped from the clinic. Also, because abortion is profoundly connected to the female body: life/birth/motherhood/womanhood. I needed to go through grief and guilt to reach a place of awareness. Not forgiveness. I’d committed no sin. But awareness.”

At Room we support and encourage freedom of expression and the idea that a diversity of voices and experiences are both valid and vital in order to foster compassionate understanding. Here we present to you Month 4 of Deep Salt Water, an interdisciplinary collaboration among four artists–author Marianne Apostolides, collage artist Catherine Mellinger, photographer Melanie Gordon, and composer Paul Swoger-Ruston–based on the forthcoming book by Apostolides of the same title.

They hovered in white gowns and white sheets, a wonderland of ghostly fluorescence. Suspended from movement and animation. I’m gliding in, a succulent weakness, to take my place among the listless. I don’t quite belong; it’s an obvious gap, but I’m not sure why. “Are they okay?” I ask the nurse. He nods: “They’re recovering.”

Unlike the others (dozens of others) I’ve asked for local anesthesia.

The fish disengage from their surroundings. It’s hard to arouse them; it’s not like the ‘normal’ sleep of mammals. Trance-like phase of non-response. The mind is restful, free from sensory–sealed off as the world streams past. Tranquility that’s born of absence. Silently, I slide among them.

Sometimes in coral, amidst vegetation; inside a sponge, or buried in sand. For us, it’s rows of medical beds. I’m placed in the third row. The women around me don’t seem to notice: they’re lacking engagement with outside world. They’re not ‘awake,’ but we can’t call it ‘sleep.’ It’s the amniotic bliss of amnesia.

The anesthesia wears off slowly.

The girl beside me has hundreds of freckles; they’re windswept across her prairie cheeks. Her hair is brown. I don’t know the colour of her eyes: her lids are drooping. Amongst all fish, it’s only sharks whose eyes have lids. But sharks can’t sleep! Nature’s humour is quite sadistic; sometimes laughter comes from fear.

During sleep, we consolidate sensory: gather ‘experience’ into a body.

Sleep is not the same as unconsciousness.

Myriad proteins, on dendrites and ethics, will no longer function.

The women were floating like virginal angels, lobotomized beauties.

The memory of the ‘event’ is missing.

“This one’s awake,” the doctor said. Such surprise in his voice. They can say shit like that when the women are sleeping: unconscious maidens, blank for proceeding. “Please tell me what’s happening…” One man, two women. Another man enters. I think he’s a nurse. Now I’m cleaning the crumbs off the floor at home. The carpet is green. You’re trapped in the waiting. I never asked you what you were thinking. “What’s happening?!” The vacuum is scary. The sound frightens children. It’s over in seconds. They look at the body-part: flesh and nozzle, node of tissue. The nurse, though: he has looked in my eyes. “They’re about to remove the embryo…” Kindness, to tell me. To treat me humanely. It’s she who’s not human: she’s only a fetus. But I’m a woman; it’s my right.

Maybe the man was an orderly; they didn’t say why he was there. He might’ve carried bleach for the table. The hordes of women were waiting their turn. They were holding their number. The doctor only held a hose. And it kept getting longer: a white-worm sea creature in the depth. “They’ve removed the embryo…” Clean the equipment. We must fully sterilize. Someone else will be here soon. The hallways seemed like glaring tunnels–stark light, doors–that took me toward the cavern of women. The nurse must’ve wheeled me, unless he’s an orderly. Clearly, I can’t recall his face. My vision was voided. The features were suctioned, removed by the vacuum. Please tell me: I can’t remember his eyes. But he spoke to me. He treated me like I was a person.

They handed me a bundle of clothes and a box of juice, which contained a straw. I spoke with the girl who has numerous freckles. We drank our juice. I don’t remember the many transitions. I lay on a bed amidst resting coral, then I’m holding my jeans and my socks. My juice was apple mixed with sugar. They asked me to drink before getting dressed. The girl is young, then I’m in the change-room. It’s not a ‘room,’ just curtains draped from metal rods. I zip my jeans. The woman beside me has dropped her panties on the floor; I’m watching her fingers pick them up. My eyesight is shaky. Or maybe the shaking is her hand.

The ‘sixth extinction’ is coming fast. I can’t comprehend it: I can’t put a scene to this phrase that will happen. A mass extinction–a magnitude of devastation, exceeding my imagination. Still, I want to be awake. Whatever happens, I will be awake. The slumberous maidens taught me that. A vision so supremely repulsive: the stupor amidst the mistakes we made.

The girl with the freckles has large brown eyes.

This was her third abortion, she said.

This month’s images are from Jellyfish, a mixed-media collage by Catherine Mellinger, macro-photographed by Melanie Gordon.