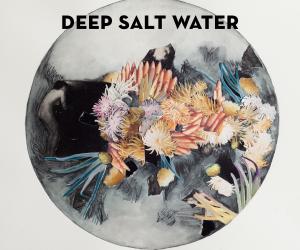 Room is pleased to bring you the fifth installment in the captivating and thought-provoking Deep Salt Water, an interdisciplinary collaboration between author Marianne Apostolides, collage artist Catherine Mellinger, photographer Melanie Gordon, and composer Paul Swoger-Ruston, based on the forthcoming book by Apostolides of the same title.

Room is pleased to bring you the fifth installment in the captivating and thought-provoking Deep Salt Water, an interdisciplinary collaboration between author Marianne Apostolides, collage artist Catherine Mellinger, photographer Melanie Gordon, and composer Paul Swoger-Ruston, based on the forthcoming book by Apostolides of the same title.

Deep Salt Water is an intimate memoir about abortion, expressed through the language and imagery of the ocean. In Month 4, the reader was taken inside the abortion clinic. The intensity Apostolides felt as she wrote that piece—the long-buried sensations she needed to call up in the body through the act of writing—are embodied in the ferocious tone of last two sections. She then shifts away from the personal towards the notion of awareness—awake-ness—in the face of our decisions.

Here, Month Five, takes us deeper into the relationship of him and her, against the backdrop of glacial Alaska where the impending effects of global warming stare our narrator down. It’s a moving treatment on the nature of memory and presence and how some things can disappear without our involvement, and yet we are always a part of it, feeling the gone-ness, perhaps, only when everything is too far gone.

If he was there, I don’t recall. The railing was there. My hipbones were there. They were pressed against the bar of metal. Torso forward: I looked down. Our ship was slicing through the sea—this pristine coolness, wilderness off the coast of Alaska. Alcohol was served down below.

A pod of dolphins skimmed along, beside the ship: a constant rotation, propulsion in dynamic waves. “They’re playing with us!” I heard him exclaim. But their motion seemed driven, devoid of joy. My voice was defensive: “That’s my opinion, okay?”

They say the glacier groans as it calves; they say the resulting icebergs shudder. I don’t remember what I said to set him off. The ship cut its engines and silence ensued. I hadn’t realized how angry, that engine, had clogged my ears. Adrift within the alien landscape: blocks of ice were gliding, aimless, colourless in the scattered light. The sun was weak on the upper deck. Immense emptiness: people were elbowing for a view.

The melting of glaciers is causing the level of oceans to rise.

But ‘gone-ness’ is hard for the mind to conceive.

I longed for the dolphins, for movement to give me a focal point. Instead, I faced the frozen edifice. The crevasse was yawning down the sheer; the ice glared blue from dense compression. Watching, waiting, for pieces to fall. “Isn’t this great?” I didn’t respond. A seabird’s cry was ricocheting off the chill. Evaporation swathed my skin: a fine mist, I breathed it in, and started to shiver. Tremendous quaking: “I’m not cold,” I said, when he tried to touch me.

What I recall is the slow-motion nature. The chunk of ice pulled away from the glacier. Excruciating, anticipation—the bead of tension—rising in the lapse of time. We know what will happen: this glacial yield. Yet we’ll stare, transfixed, as it does.

I think you spoke when the ice came down—

But the brute force drowned you, out.

This month’s images are from Dolphins, a mixed-media collage by Catherine Mellinger, macro-photographed by Melanie Gordon.