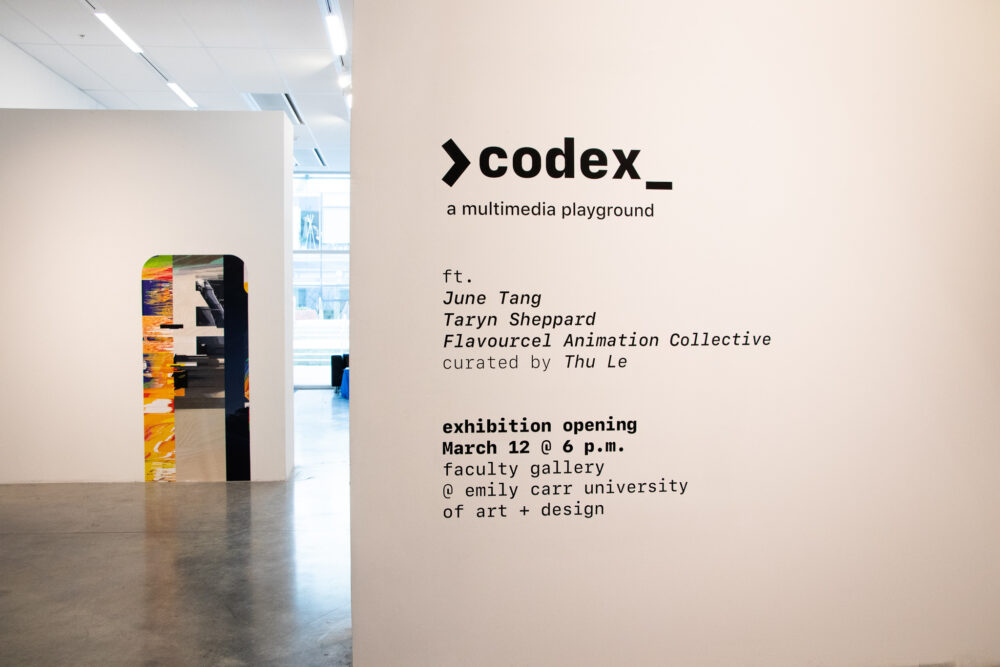 As a part of the 2020 Growing Room Literary & Arts Festival, Thu Le curated a beautiful visual art exhibition, >codex_, at Emily Carr University. This exhibit featured the work of June Tang, Taryn Sheppard, and Flavourcel Animation Collective, and was an attempt to understand the act of writing and its manifestations. We are so pleased to spotlight the exhibition and the artists here!

In the exhibition, Tang, Sheppard, and Flavourcel share a simulated living room space that invites viewers to interact with each of the works. This living room, while furnished with sofas and chairs, TVs and computers, tables and desks, and trinkets and miscellanea allusive of a functioning home, is at best preternatural and at worst ghostly. The more we tried to furnish the room, the less it looked like a room. Naturally, what we talk about when we talk about writing is that the more we theorize and regulate writing, the more writing tries to elude such theory. Be it code or prose, we welcome hapticality into our writing process. We believe writing is material: it is playful, experimentative, chaotic, technical, and takes unexpected forms. Most importantly, writing in and of itself, is how we think. In​ >codex_​, the act of writing seeps into paintings, animations, and games; yet, these forms are not the destination of writing, but a plane on which the boundaries of writing will collapse. 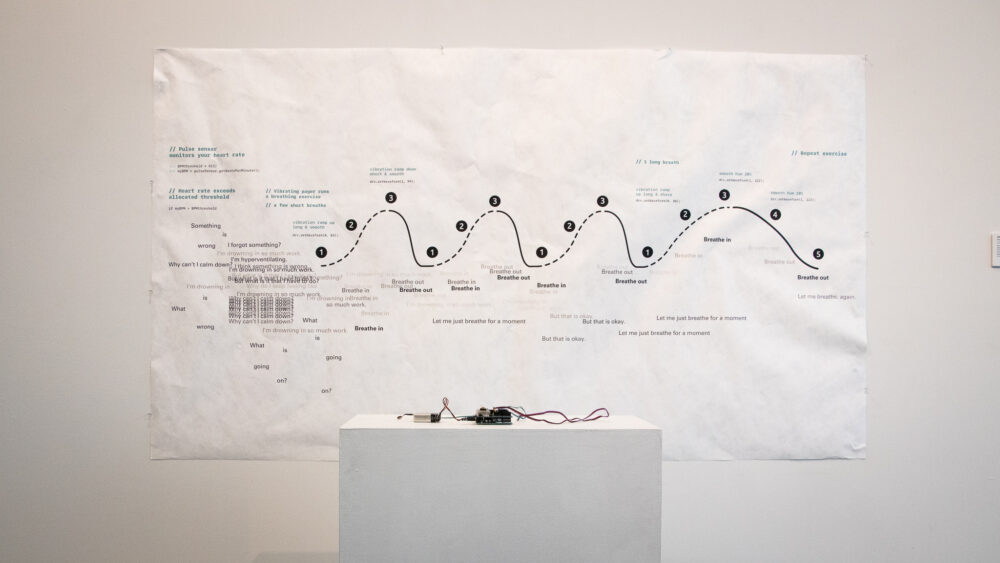 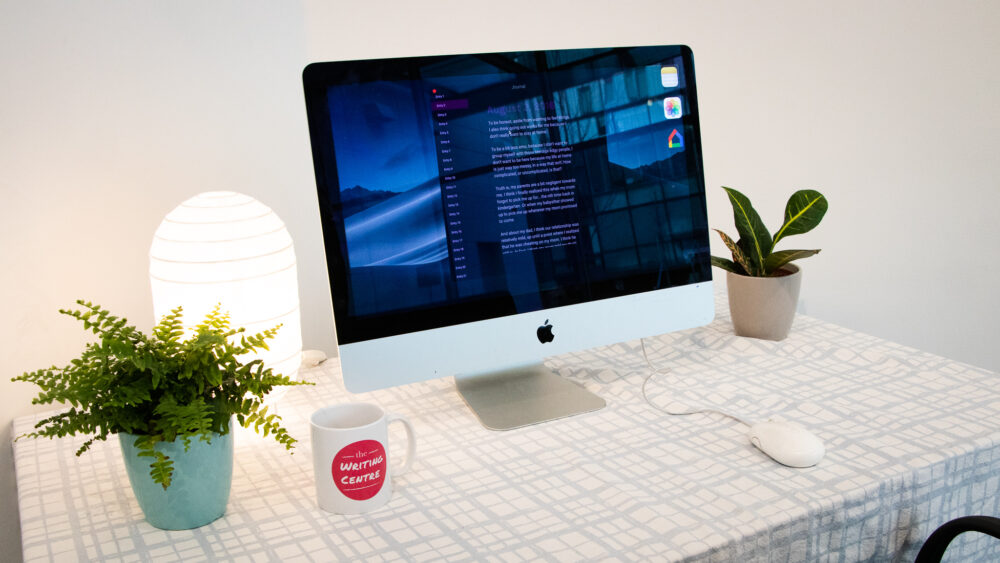 June Tang fleshes out her connection to ”dislocation,” “home,” and “meditation” as an international student in her interactive new media installations ​Breathr ​and ​Xa/Far​. She engages with meditation in her work, using writing as a way to construct a space for mindfulness and reflections. The works require a long time of interaction, as unexpected depths beneath the surface are only revealed over time. They put emphasis on the values of slow and mindful ways of being, amidst a contemporary society that is becoming more chaotic and fast-paced. 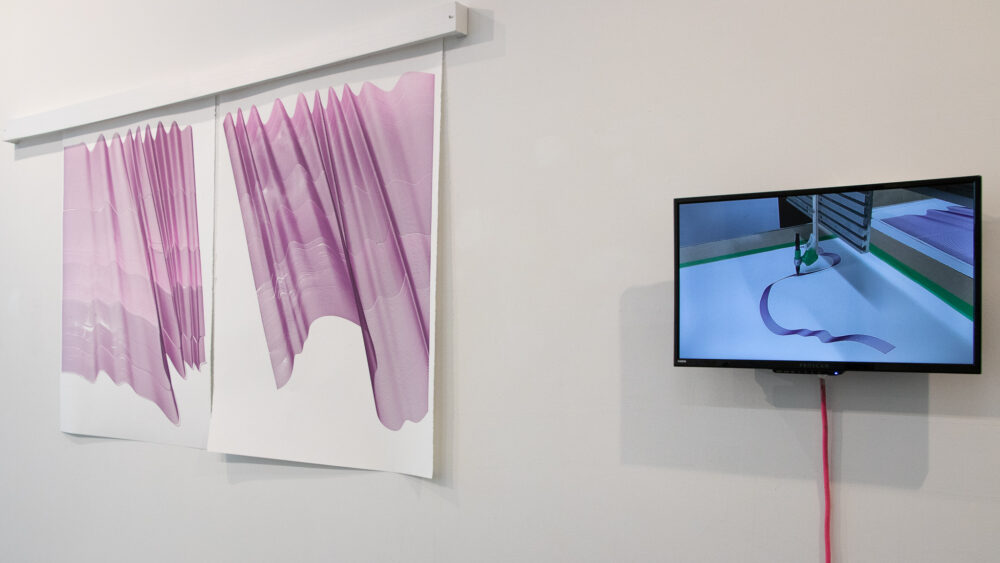 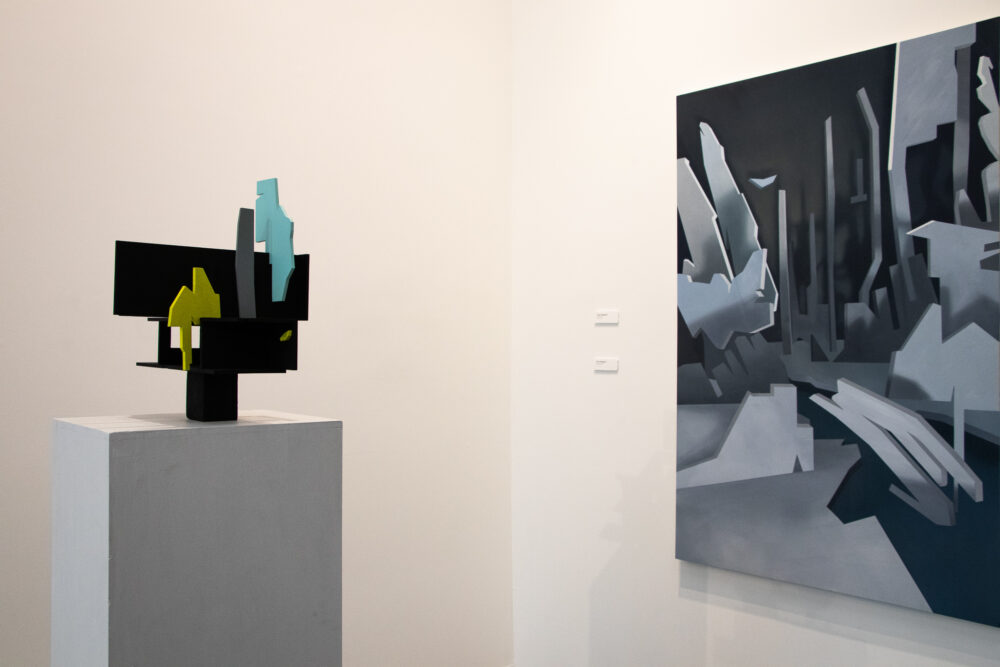 Taryn Sheppard, on the other hand, constructs multi-media sculptures to approach unreachable depths of space and memory. Deceptive and ironic, Sheppard’s work questions the simulated and metamodern state of being and thinking. Sheppard as an artist is always half a degree of separation from her installations (​Threshold​, ​Hollow​, and ​Viewfinder​), as she utilizes her techniques of digital fabrication to realize her artistic visions: while she has control over these visions, she has no say in how her intriguing process unfolds.

Threshold​, completed in 2019, is a work on paper with watercolour ink measuring approximately 8 feet by 5 feet. It was digitally drawn using drafting algorithms in CAD, with the intent to simulate the movement of a breeze through a curtain. The CAD drawing is then drawn by a CNC machine outfitted with a special carriage for the watercolour marker. Irregularities in the robotic drawing process are seen as in the variations of tone, as the ink levels wear down throughout the process. 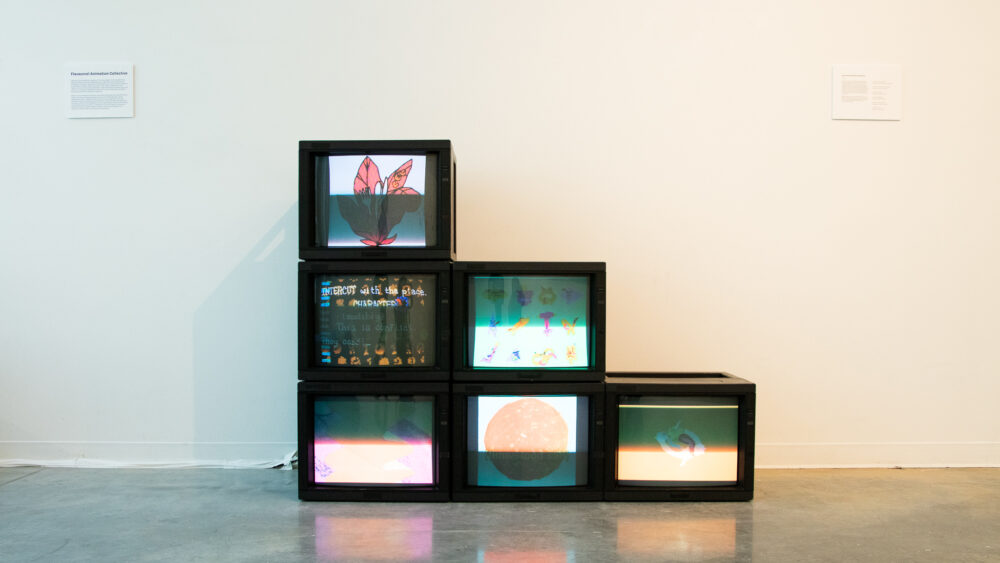 Flavourcel, at the same time, introduces “play” to the mix and proposes a mode of writing that is overly chaotic and experiential, via a series of animated GIF to be paired with a literary “charcuterie.” Across the mind’s charcuterie can be found all the pieces both necessary and not for the making of your next meal, snack, prose, script, tidbit, etc. Such an unseemly variety of flavours and textures, one must make their selection of props, abstractions, patterns, and assets from, to then decide for themselves where the balance lies. A platter of sticky sweets, aged tropes, savoury fats, crispy colours, heavy odours, smooth lines, grainy papers, fresh organics, tangy spreads, pulpy plots and cultured cravings to fill the aesthetic of the inspired gut.

Animation, writing, and many other forms of art all begin with the empty page. For us this became a blank plate. In the spirit of snacking and sharing, it evolved into a meat and cheese board. Welcome to the charcuterie of the mind.

You can continue to support and celebrate the rest of our Growing Room artists by ordering issue 44.1 Growing Room online, and watch this space as we share more content from contributors to the Growing Room 44.1 issue all throughout the month of March.

June Tang is an interaction designer whose works focus on thoughtful human experience, through the mediation of technology. June creates works that question the viewers’ positionality, and how they exist in relation with other humans in the world.

As an international student from Vietnam, June is constantly negotiating intercultural differences and conflicts in her life. With writing being her preferred medium of expression, she is interested in how textual composition could be combined with technology to navigate through these conflicts. To June, creative writing creates a space of imagination for thoughtful experiences to be envisioned, which are then realized through coding.

Taryn Sheppard creates multi-media works that explore the relationship between memory and space through digital-to-analog processes. Drawing on her background as an architect specializing in digital fabrication, her methodology involves painting from rendering, robotic drawing and clay printing.

Her works are digital architecture imaginaries made real with conventional art mediums like oil paint and clay to elucidate the metamodern condition of a longing for depth that is beyond reach.

Flavourcel is an animation collective of 10 artists based in the Unceded Coast Salish territories. We work collaboratively to make short-form experimental animations that work to play with the contemporary narrative of what animation is, and what it could be. We produce GIFs, music videos, installations, print media, and more. We are heavily settled in collective decision-making structures and we try to keep the collaborative spirit at the core of what we do, as well as the sharing and democratizing of resources.

Many of us are animators trained at universities and we felt that the path that is laid out for many emerging animators exists in the following binary: be an independent auteur making animations alone in your basement or join the animation industry. We have found that both are limiting in their own ways and we strive to flesh out the inbetweens of pursuing making in this art form that we love. We have also found that it is important to introduce play into animation and the art scene at large; making art doesn’t have to be so serious or so solitary, it’s better when you bring your friends along.

Thu Le is a writer and writing tutor in her 3rd year at Emily Carr University, studying Critical and Cultural Practices. She writes as a way of making sense of the complex human experience in a post-colonial context. Because of the history of her native country, she takes special interest in the analysis of heritage, homeland, and navigation through multiple turbulent geopolitical spheres.