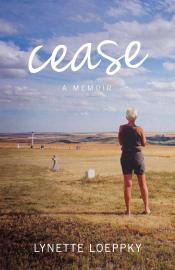 Cease by Albertan Lynette Loeppky is a memoir that slips back and forth through time and place; the main story of the sudden illness of Loeppky’s partner Cecile bridges the interwoven flashbacks of both the beginning and ending of a love affair, and the women’s purchase of a hobby farm.

Lynette is all but ready to leave her demanding and difficult partner when Cecile’s diagnosis comes down: ovarian cancer, stage four. The women’s lives are thrown into an acute crisis that overshadows the simmering threat of their breakup. There is no way Lynette can leave now.

Detailing Cecile’s time in the hospital, Loeppky’s story floats between two poles: good and bad, up and down. In gentle yet firm prose, she excoriates the kinks of the Alberta health care system all while celebrating the commitment of some of its best workers. Cecile is failed by doctor after doctor, and is left with little hope. Any options left for treatment would only draw out the inevitable. Her intense pain is managed by hard-working front line workers as best they can.

With strong descriptive passages and sharply written observations, Loeppky avoids falling into a jaded and maudlin retelling of the last weeks of her partner’s life. The difficult and emotional hospital scenes are played out against memories of the two women’s chance meeting over an accounting error, their courtship, and eventual ownership of a hobby farm outside Calgary.

Compounding her frustration and sadness over losing her partner, Loeppky examines her guilt over not loving Cecile enough, and tries to reconcile her anger toward the woman who loved her with both a fierce and critical heart. She writes, “The ring Cec had given me had fallen off my finger in the middle of a deepwater workout. I had felt the odd sensation of its release as a piece of the band broke, then confirmed its absence with my thumb. The band was gone.”

This need for release is a theme that returns again and again throughout Cease. Loeppky has crafted a story that anyone who has passed the final weeks with a terminally ill loved one will recognize, yet the monotony of those difficult days and the roller coaster of emotions are clearly and reverently evoked by Loeppky. She is unsparing in her observations, oftentimes most critical of herself. While unhappy with Cecile, Lynette is careful to shoulder some of the blame, always aware of the part she plays in the dynamics of their relationship.

By gently braiding past with present, Loeppky elevates Cease into a story that is more than a memoir of loss—it is a testament to the complexities of sharing life and love with another. The descriptions of their time on the farm extend these themes beyond hospital walls, allowing readers a glimpse of an honest account not only of death, but also of the difficult beauty of life.