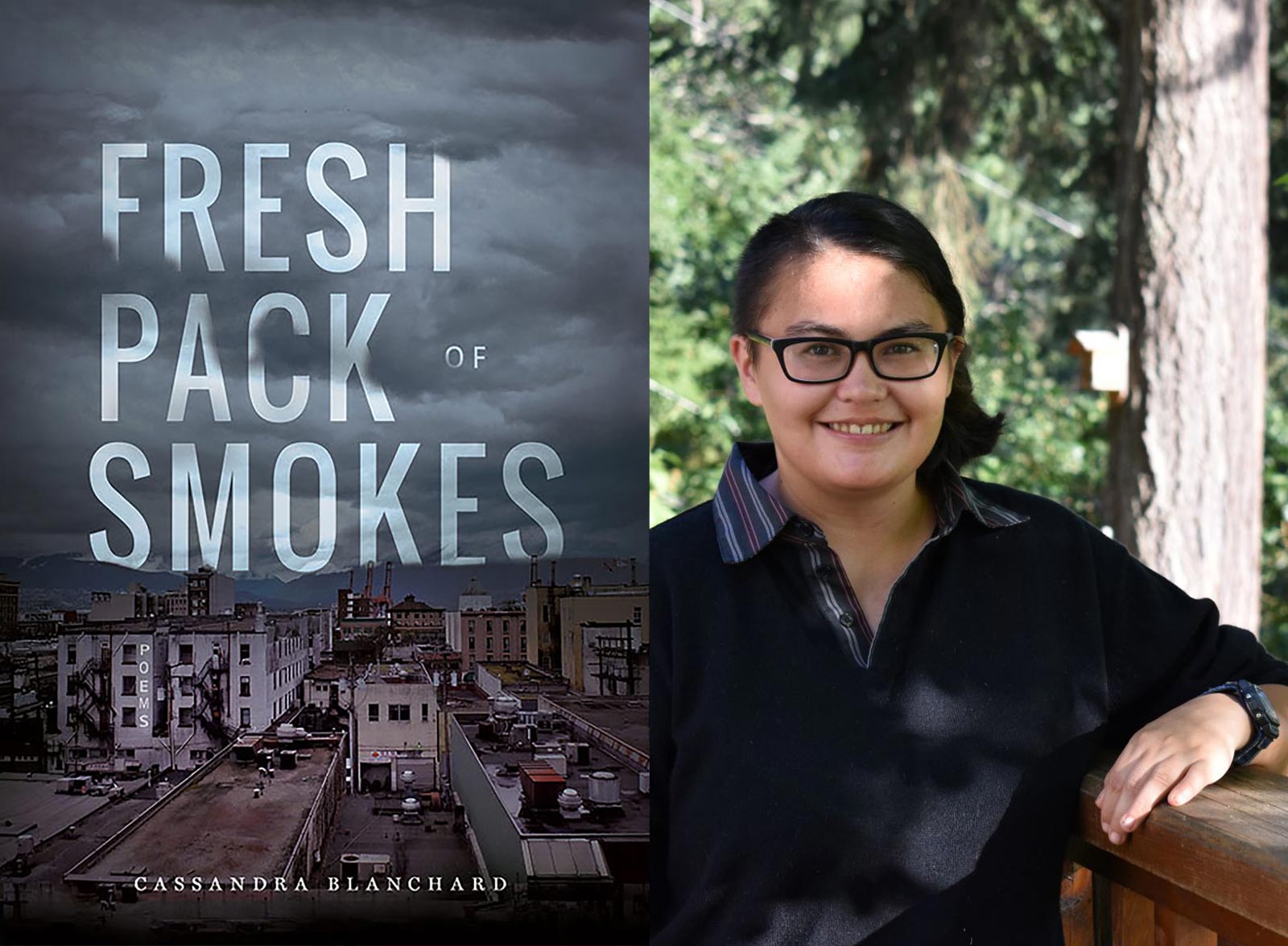 Cassandra Blanchard: On Her “Love” Poems and Writing Her First Poetry Collection #GrowingRoom2020

Cassandra Blanchard’s debut poetry collection, Fresh Pack of Smokes, is an immersive, intimate account of drug addiction, love, sex work, and survival on the streets of Vancouver. These are prose poems that shake with urgency, deftly stacking vivid imagery which twists to the emotional core of the book. Her work is unflinching, tender, and fierce. In the following interview, Selina Boan speaks to Cassandra Blanchard about her “love” poems, the biggest challenge in publishing her debut poetry collection, and the community she found because of it.

To celebrate the upcoming Growing Room Festival 2020, we are chatting with a few festival authors to learn more about them and their work until March rolls around. You can read all the #GrowingRoom2020 interviews here. In the following interview, Selina Boan, Growing Room’s Volunteer Coordinator and Room’s 2018 Emerging Writer Award recipient, speaks to festival author Cassandra Blanchard about her “love” poems, the biggest challenge in publishing her debut poetry collection, and the community she found because of it.

Cassandra Blanchard’s debut poetry collection, Fresh Pack of Smokes (Harbour Publishing, 2019), is an immersive, intimate account of drug addiction, love, sex work, and survival on the streets of Vancouver. These are prose poems that shake with urgency, deftly stacking vivid imagery which twists to the emotional core of the book. Her work is unflinching, tender, and fierce. This collection is a must read. Cassandra Blanchard was born in Whitehorse, YK, and is part of the Selkirk First Nation. She lives in Duncan, BC.

This interview was conducted over email.

ROOM:  First, let me begin by saying how excited I am to talk with you about your debut poetry collection, Fresh Pack of Smokes. There is an undeniable urgency to the poems that is immersive and unflinching. Each prose poem is a single, punctuated sentence that propels the reader through memory, place, and experience. Can you talk about why inducing this sense of urgency was important to the book?

Cassandra Blanchard:  When I was writing these poems I typed them up exactly how they read in my mind, as streams of consciousness. The poems would pour out of me one after the other and after I wrote the poem I’d play with commas and periods. This process alone created a structure that in itself read as urgent. On another note, I wanted the book to have a sense of urgency because the subject matter is urgent. What I mean by this is the nature of drug use, sex work, violence and psychosis is on a heightened and anxious level. These activities take a lot of energy. For example, street sex work is often an urgent and rushed business as one is always on the lookout for police and dates are often done in cars, either parked or driving. I wanted the reader to feel this urgency and anxiety. So that’s why it’s important to the book. I want the readers to feel what it’s like to undergo such stressful things.

ROOM: The book begins with an epigraph by Thomas Hood, “There is a silence where hath been no sound, / There is a silence where no sound may be, / In the cold grave—under the deep deep sea.” Could you tell me a little bit more about the significance of this quote to the book and your choice to open the collection with these words?

CB:  I first encountered this poem when I watched the movie, The Piano.  The image of the woman dead in the ocean while the narrator recites this poem stuck with me for many years. After I finished writing most of my poems, I figured that it would be a perfect quote to start off the book. This is because a constant feeling throughout the entire manuscript is a deep sense of isolation and loneliness. There is a heavy silence attached to these two emotions.

When I was in the throes of psychosis, it was such an isolating feeling and the outside world was silent; I only heard the bizarre delusions inside my head. During the never ending quest for drugs, the main thing I felt was the all-consuming need to get high while the needs of basic self-care went silent. This theme of silence is a consistent thread in these poems. The woman “Kayla,” who pops up throughout the book, kept me dependent and isolated. She managed to keep me in a state of silence and I ceased to hear the outside world; I only heard her need for me to make drug money. I also felt these words by Thomas Hood to be completely beautiful.

ROOM: Speaking of relationships in the collection, I was moved by the way you captured what it is to love someone or something fiercely, even if that person, or thing, hurts us. Relationships, in all their forms, are complicated, messy things.  Can you talk about the series of poems titled “Love” that thread throughout part two of the book?

CB: My editor came up with the idea to title the poems that deal with desire as “Love 1,” “Love 2,” etc. All of these poems have themes of love and desire, whether it is for a person or a thing. There is a poem that talks about my feelings for crack cocaine, how I was so completely in love with the drug and how I would do anything to get it. This is desire for a thing, which can be just as intense as desire for a person. At one point this drug was the most important thing in my life and it came before everything else. It came before my family, my thirst, my hunger, sleep, safety, other people, and myself. It was like crack was my soulmate.

In other “love” poems, there is love and desire for people. Even though “Kayla” was insidious, I was absolutely in love with her. She was the first woman I slept with and my first girlfriend. I talk a lot about the abuse in this relationship but there are also elements of my fierce feelings of love and loyalty towards her. There is also a poem in the book about the deep feelings another woman had towards me. In this poem, I spent hours in her room smoking crack while she told me many stories about her life. Soon she was telling me that God sent me to her, that I was an angel, and that I was sent to her for a reason. I wonder these days if she is still alive and I am afraid that fentanyl killed her. That is one thing I had to do for my recovery—letting go of people that I grew to care for. So these “love” poems are all about intimacy.

ROOM: I definitely felt that sense of intimacy reading the book as well as the difficulty of having to let go of people you care for. Did you face any challenges when writing and/or editing this book?

CB: I think the only challenge that I faced throughout the whole process was the fact that once this book was published, the entire world would know intimate details of my life. There are many things I did that I am not proud of. For a long time, I felt uncomfortable with the fact that for many years I had done outdoor street sex work. In fact, it was during the process of publishing poems in the sex worker anthology Hustling Verse (edited by Amber Dawn and Justin Ducharme) that I became unashamed and even proud of myself. Yes, I was a sex worker and these are my experiences. Fresh Pack of Smokes contains such personal stories and now anyone can read about them. For many years, I didn’t have sober friends who had done sex work so I didn’t really talk about it except sometimes to my counsellors. When my book was published, I met and connected with other women who had done sex work and it felt so good to talk about it with them. It was a definite release of pent-up emotion. So the only real challenge in doing this book has been becoming transparent about struggles in my life in front of the world.

ROOM: What advice would you give to emerging writers or individuals who are interested in getting started?

CB: Never give up. Write anything that comes to your mind whether it is pages or just a few sentences. If you keep writing you will find what works for you and what doesn’t. I also think it’s fun to write about small mundane things and give life to them. You’ve got to practice too.

ROOM: What’s the first story or poem you remember writing, and how does it relate to your current work?

CB: I remember my first experience with poems was when I wrote teenage angst poetry over fifteen years ago, and those poems had nothing to do with the poems in Fresh Pack of Smokes! However, when I was twenty-one or so I had this black notebook which I filled with poems about East Hastings and some of my experiences. It was a bit like a scrapbook. I would say that notebook was a preamble to Fresh Pack of Smokes. I had written a long poem about the streets and drew pictures to go with it. When I was in jail (I was twenty years old), I had a sketchbook where I drew pictures about drug addiction and sex work. These pictures and scrapbooks were for sure a taste of what was to come. A couple years ago I was re-reading this notebook and I could see how entrenched I was in the drug lifestyle. It just radiated loneliness and survival in the face of violence and exploitation. I could also see that I still managed to be creative in spite of being knee deep in addiction.

ROOM: What is something that has surprised you recently or something you are excited about?

CB: I am very excited about the upcoming Growing Room Festival. I am doing at least two readings and am participating in a panel discussion with Amber Dawn, Mercedes Eng, and Justin Ducharme—all of whom are incredible poets. I was very happy when I was contacted to join the festival and it’s kind of funny as a while ago I was rejected by Room Magazine!

ROOM: Is there anything else you would like readers of Fresh Pack of Smokes to know about your book or writing process?

CB:  Readers need to understand that a large part of my story comes from a place of exploitation. There are many women who choose to do sex work and are happy with their situation. It’s a complex issue and my story is just one of many. I want people who have little knowledge of the drug lifestyle to treat my book like an educational tool and to learn from it.  For my readers who are in recovery, I want them to read my book and see that there is hope and a light at the end of the tunnel. It will be ok.

You can join Cassandra Blanchard at the following Growing Room Literary & Arts Festival on March 14 & 15:

Criminalized Verse: The Crossroads of Sex Work and Poetry (Panel/Reading)