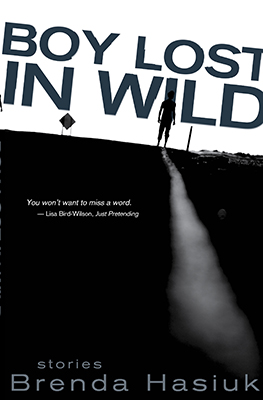 The protagonists who inhabit Boy Lost in Wild, Brenda Hasiuk’s debut collection of short stories, exist in the brief space lodged between childhood and adulthood.

The protagonists who inhabit Boy Lost in Wild, Brenda Hasiuk’s debut collection of short stories, exist in the brief space lodged between childhood and adulthood. They hail from diverse backgrounds and unique circumstances, but each broods with emotions synonymous with adolescence—anger, fear, and confusion among them.

Whether she’s describing a defiant Iranian sandwich artist or an inner-city youth speaking to a hushed crowd, Hasiuk has a knack for grasping the anxieties of youth, carefully crafting characters that are complex, yet realistic. Each of the eight loosely connected stories that make up Boy Lost in Wild take place in Winnipeg, which is also the city Hasiuk calls home.

It’s no surprise that Hasiuk has chosen to write about teenagers. She has previously written two novels for young adults, Where the Rocks Say Your Name (2006) and Your Constant Star (2014), both of which also are set in Manitoba. While her stories aren’t autobiographical, Hasiuk does draw on her own experiences working in Winnipeg’s not-for-profit sector.

In Boy Lost in Wild, Hasiuk’s characters are conflicted. They’re desperate to explore. Their parents hover, and they’re intrigued by strangers. They feel alienated, lost, and alone. It’s Hasiuk’s attention to detail and meticulous character development that makes Boy Lost in Wild memorable, as evidenced in this description of one of Hasiuk’s most complex characters, Monique: “Monique’s presence is about small oppressions: the way her thighs brush together in jeans, the way she huffs through every-day tasks, the way she chews, her peanut butter breath, her flowery lotions on top of body odour; the way she will appear, huffing, demand something of him he knows not what.”

Despite its smart and concise prose, Boy Lost in Wild falters in each story’s prologue. Instead of cleverly weaving together fact and fiction, Hasiuk begins each story with a list of what she calls “carefully chosen trivia,” which ultimately have little relation to the stories that follow. While it might be interesting to learn the inspiration behind Paul Simon’s 1986 hit song You Can Call Me Al, it’s irrelevant. These random factoids fail to add texture to the work, instead jarring readers from Hasiuk’s otherwise competent collection.

The characters in Boy Lost in Wild may not all share the same story; however, they do share a city. In their attempt to navigate Winnipeg, Hasiuk’s characters learn to navigate themselves, exploring the isolation, both personal and geographical, that dictate their lives.