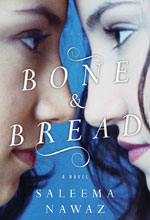 The thing about Saleema Nawaz’s Bone & Bread is that I expected a book, (your typical book maybe?) about the larger sister and the anorexic sister. The tension between the two. How they navigated high school. How they were approached, or not, by boys. How they overcame their struggles and grew out of it all. As someone who has gone through a broad spectrum of eating disorders, I gravitate wonderingly to that kind of story, that novel that explores what’s going on—with young girls mostly, though of course we know that boys are increasingly  disordered as well—and how they see their bodies. Usually a traumatic event tips the scales, as in the case of these sisters—but rarely have I seen a story so deftly and unusually described: two Sikh girls living above their uncle’s bagel shop in Montreal.

Their mother is a beautiful airy-fairy type who believes in many spiritualities, many religions, and exposes the girls to parties and sleepovers with strangers who are (thankfully) kind. They have the kind of existential conversations that few mothers do with their daughters. And the love and the taste and the colours of the mostly vegetarian food, fruits, vegetables, stews infuse the intense relationship Beena and Sadhana have with their mother. But this is soon to end, and Beena and Sadhana start to separate in ways that are completely off the spectrum: Beena toward teen motherhood and Sadhana toward voices attacking her already tiny body.

What is transcendent later about this story is Montreal in all her characteristic hues, and Beena’s son, who wants quite secretly in all his “manhood” of eighteen years to go back to seeing his aunt and living with her the way they used to during his first eight years. This book is about his journey too, and the secrets the sisters have kept from him. What I loved about this book was exactly what I didn’t expect, an intricacy of plot, sense-sound-space of Montreal and the fusion of an unhuggable, yet caring Sikh bagel maker uncle, a delicate dancer who is wasting away, and the mother and son who are bound together. This gorgeously wrought book will make you uncomfortable at times because it is a peek inside us all, bound by bone and breaking bread.