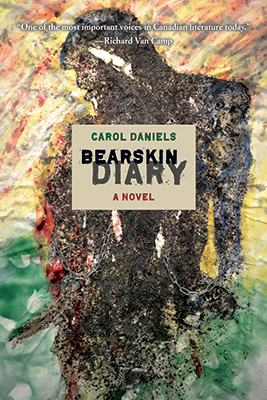 Bearskin Diary is a humane, unflinching portrayal of a woman asserting her voice and claiming space in an often hostile nation.

From the 1960s to the late ’80s, the Canadian government forcibly removed over twenty thousand Indigenous children from their families, sending them to be fostered or adopted by white middle-class families. As with the residential school tragedy, the children taken in the “Sixties Scoop” grew up severed from their Indigenous families and culture. In Carol Daniels’s debut novel, Bearskin Diary, Sandy Pelly, a survivor of the Scoop, embarks on a career as a news reporter in 1980s Saskatchewan. As she connects to local Indigenous people through her reporting, Sandy begins to yearn for a deeper connection to her Cree heritage.

Daniels, a former journalist and Canada’s first Indigenous national news anchor (as Carol Morin), portrays the broadcasting world as a noxious environment for a young Cree woman. But Sandy’s fierce desire to tell stories draws her closer to the Indigenous communities she was cut off from as a child. Daniels convincingly conveys Sandy’s struggle to cover stories about Indigenous people with compassion while battling racism from coworkers and her own internalized prejudices. Thrust into the role of cultural mediator in a largely white newsroom, Sandy finds herself being treated as a “cigar-store Indian, here for show but expected to stay silent.” When Sandy meets an elder named Joe, who encourages her both to investigate the disappearance of local Indigenous women and to explore her own cultural identity, she finally begins to meaningfully engage with her community.

However, most of the novel’s characters aside from Sandy are flat, especially the antagonists, who are portrayed as irredeemable villains. And though Daniels juggles many intriguing storylines, she grants a lot of space to a melodramatic love story that ultimately fizzles. As a result, some of the novel’s most engrossing aspects—such as Sandy’s reunion with her family and her investigation into the missing women—are given somewhat short shrift.

As well, the novel is hampered by Daniels’s decision to write extensively in the present tense. While it lends a sense of immediacy, the use of the present tense clutters the narrative with ponderous details of the characters’ daily lives. Furthermore, the frequent shifts from the present to Sandy’s memories in the past tense are clunky and become tedious to read.

Still, Daniels has created a compelling character in Sandy, and does not shy away from depicting her weaknesses. Though the writing doesn’t always support the many narrative threads Daniels explores, Bearskin Diary is a humane, unflinching portrayal of a woman asserting her voice and claiming space in an often hostile nation.