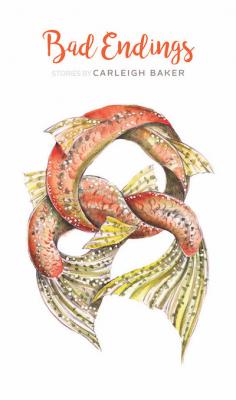 Carleigh Baker’s debut collection of stories is a weird and wonderful frolic through the vagaries of relationships, especially their ends and mostly from the perspective of women.

Bad Endings, Carleigh Baker’s debut collection of stories, is a weird and wonderful frolic through the vagaries of relationships, especially their ends and mostly from the perspective of women. Baker combines the quirky with the sensitive in a snappy style to reveal the importance of relationships and also how doomed they can be. Most characters have not reached middle age, so longevity is not an issue in romantic couplings or friendships.

The first story, “War of Attrition,” is a splendid introduction: Corina prepares to leave her husband by getting a job. She hands out free newspapers at the SkyTrain station, and her rival newspaper distributor, a woman from Ukraine, cannot understand why Corina wants out as her husband gives her everything. And there’s the problem. Andrew has given her so much that Corina has lost herself. Physical comfort comes at a price.

At the opposite end of the spectrum is “Baby Boomer,” in which Greg watches his daughter Danica give up her life for a loser who cannot hold down a job. Greg’s wife believes that Travis will get violent with Danica, but Greg refuses to think that. He’s wrong.

And other family relationships are examined, such as in “Buddy Frank’s Steps to Success,” a heart-breaking story about mental illness in which Ella has left a care facility and lives with Vi, a woman who tries to keep her own illness at bay by extreme order. Ella knows it’s extreme, but she understands why Vi does it. And she worries that if she moves out, Vi’s obsession with Prince Edward and cleanliness will be out of control. When Ella’s sister asks her if she ever writes to Prince Edward, Ella responds, “No, dumbass. We’re not all the same—” And that line shows one of Baker’s lovely touches: life has humour even when people are suffering.

Stylistically, Baker uses present tense, a popular technique that has its limitations, I think. The immediacy of the present tense works against a sense of reflection, which is fostered by the more conventional past tense. Somehow, the present tense is more ephemeral, and Baker may wish to play that off against her solid presentation of place and time. The stories have numerous references to contemporary culture (Starbucks, Tinder, drugs), and the language is realistic. Some stories connect; for example, beekeeping comes up in more than one. First person narration is reserved for female perspective, and overall Baker appears quite conscious of staying within a particular contemporary world of ordinary, troubled people while showering them with great insight.

Candace Fertile teaches at Camosun College in Victoria, B.C., and has been a member of the Room collective for over a decade.