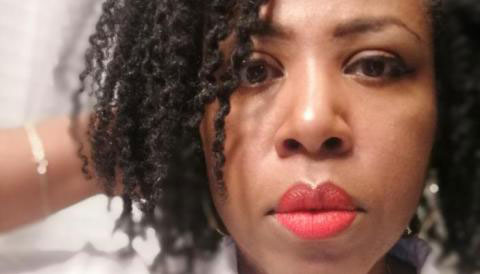 An Interview with stephanie roberts

Panama born, prize-winning, Quebec-based author stephanie roberts grew up in Brooklyn, NY.  She has lived in and around Montreal before settling in Beauharnois. Widely published in literary journals and magazines across the country and abroad, including Poetry, Event Magazine, Arc Poetry Magazine, Montréal Gazette, The New Quarterly, Atlanta Review, and Crannóg Magazine, her poetry has twice been published in Room: “Looking Everywhere but Inside” appeared in issue 40.2 (“Our Rubble, Our Loss,” 2017), and “Tenderheaded” appeared in issue 43.1 (“Hair,” 2020).

roberts’s full-length collection, rushes from the river disappointment, came out with McGill-Queen’s University Press as part of its Hugh MacLennan Poetry Series this spring. She has since read from this collection with the Word on the Street Toronto and will be featured at the Ottawa International Writers Festival (https://writersfestival.org/events/fall-2020-podcast/poetry-and-process) this fall. rushes from the river disappointment was recently announced as a finalist for the A.M. Klein Prize for Poetry. In what follows, we talk to roberts about her new book, poetic forms, the role music plays in her writing, her advice for aspiring authors, and more.

AM: I think it would be challenging to attempt to “sum up” your new poetry collection, rushes from the river disappointment, as there’s a fair amount of variation in theme, form, and perspective among these poems. One recurring trait I noted, though, was this intriguing balance (but also tension) between reverence and doubt or skepticism. The speakers of your poems often find themselves disappointed in other people, for example, while experiencing wonder elsewhere, typically in more solitary situations. I think of a few lines from “Allhallowmas”: “Lustre gleams / as a private matter, a keepsake / only worshipped / away from the scrutiny of storm clouds, / or unbothered in a bar / over handheld glow…” Was this tension within a contemporary lyric experience something you sought to explore? Or was this something you discovered through writing the poems in this book?

sr: I think, in my writing, I seldom seek to explicitly examine particulars, whether abstracts like intimacy or the all-too concrete of police brutality, as much as I am curious about the expanse of my perplexity. I see reverence and doubt not as ends of a seesaw but more like spaces on a coil that rotates in continuum. While the speaker of the poems experiences disappointment in other people there is also disappointment in the self.

AM: The wonder I mentioned often seems to be grounded in or linked to natural settings. “Love Like a Waning Moon,” for example, is a gorgeous exploration of love through several similes likening the experience to parts of the natural world, especially nonhuman animals. What draws you to write about nature? Do you ever consider yourself a nature or an environmental poet?

sr: Thank you for your kind words! I don’t consider myself an environmental or nature poet tho I’m not going to be offended by that perception. A friend who knew me only in the context of drinks after a reading and some online correspondence said that he was surprised by how much nature there was in the collection.

I grew up in what I’ll call the extreme urbanism of East New York, Brooklyn. A backyard, if you had one, was mostly the concrete slab where the family parked the car. Coming to Canada, as a young adult, expanded my skill to observe nature not as something that I saw on TV but something interactive and as close as the variety of utterly engrossing critters present in even a small suburb’s backyard: ribbon snakes, leopard frogs, toads, hummingbird clearwings, the blue-spotted salamander my son once found under our deck, rabbits, raccoons, the occasional fox to keep things spicy, to say nothing of all the different birds, plants and trees. I was in Montreal when I saw my first great blue heron pass overhead like some sort of dinosaur. I would be woefully ungrateful, and a lousy artist, if I was plowing through life without respecting all the peculiarities of nature surrounding me.

AM: Re-reading this collection, I note the role that music occupies in the book. You have a fine ear for rhythm and rhyme, with lines like “mahogany perfume soaks ivory hues / sugar takes its cues from me” (“Black Lashes & White Pickup Accents”—and there’s some lovely assonance in this title, too). Other pieces lend insight into the kinds of social functions and significance music can hold for us, as in “This Is About Being Black”: “as the québécoise neighbour / plays that one soul mix she’s so- / proud-of, singing, smoking grass, / and reckoning sam cooke’s pain’s / the same as hers.” Do you consider music important to your practice?

sr: Thank you, again, for your kind words and careful reading. In considering this question, I realized that growing up music was highly valued in our household. In my earliest memory of Christmas, I remember getting this plinky plinky toy piano. Later, we had an electric organ where I learned to play “Beautiful Dreamer” and “Home on the Range.” I remember my grandmother, who was a piano teacher, helping my mother buy the Hardman piano for our childhood home. My mother kept my siblings and myself in radios, cassette player/recorders, and record players in spite of our knack for breaking these things. It was a Latin household—music AND dancing were a big deal. The relationship I have with music and poetry is hard to quantify. It seems, I experience music as emotional energy, tone, or the weather I am under; it must contribute to my writing practice but exactly how I can’t say.

AM: I mentioned a variation in form among these poems. While you favour free verse, you also write some stunning couplets. I see a particular intimacy to the poems you’ve composed in this form; when you use couplets, you tend to favour the second-person address, and there’s often a soft eroticism or sensuality depicted in these pieces. I’d like to know more about your approach to couplets, if you have any comments on the subject?

sr: As to form, if I set out to write a poem for a purpose, on a theme, I may begin with the idea of traditional sonnet narrative that I use to corral and sometimes revise work. With the idea of that structure, I may or may not overlay the work into respective quatrains. I take my understanding of the movement within sonnet structure, what Paul Fussell in his book Poetic Meter & Poetic Form called “sexual pressure and release,” and let that inform the poetic narrative, sinking it into a poem with no stanza breaks.

Your observation about the tenor of my couplets is interesting. I don’t recall ever setting out to write a poem in couplets. Writing with humility, the poem reveals its form. I remember Robert Hass saying [regarding the poetic line] The interesting thing about going from one to two is that with two you get the beginning of a proposition one is about identity two is about relation. Perhaps pre-consciously if a poem is rising in the direction of eroticism it feels right to mimic that pairing in couplets? Exciting if true.

AM: You also have some pieces that could be considered prose poems—poems composed of multiple paragraphs, justified like columns, or poems with longer, winding stanzas. You have a poem, “The Physics of Love and Other Uncertain Phases of the Chemistry in Coulomb’s Law,” that offers poetry mixing broken and unbroken lines in response to famous formulae from physics, and the collection’s title poem, the second-last one in the collection, is written as a list in 14 points. Would you consider these pieces prose poems? What draws you to these forms?

sr: There were some line breaks that were sacrificed for the character limits of the book format I was given. Rather than have my long lines randomly (and painfully) broken, the wonderful copyeditor, Lisa Aitken and I arrived at a fix of removing the original breaks so the text wrapped as paragraphs. I had to do that for most of the work in that suite. I don’t know if that answers your question. I hope so.

AM: Have you always written poetry? Do you practice any other kind of writing?

sr: I haven’t always written poetry and admire those who have. I got my public start to writing in essays, but even at that time, around 2010, I was writing poetry privately.

AM: Do you still write essays? Have you found that your essay writing has influenced your poetry, or vice versa?

sr: No, I don’t. I convert all the energy that could take the form of an essay into poetry.

AM: Have you ever combined the two forms?

sr: I have a poem that touches on some of my thoughts and feelings on the wrongfully conviction and state-sponsored murder of the fourteen-year-old, Black American, child, George Junius Stinney, Jr. It contains elements of essay but through a kaleidoscope of lyric rage and imagination the essay form usually doesn’t accommodate. I’m intrigued by the possibilities of your question, Annick. I just may undertake such an outing more intentionally. Yes.

AM: You’ve published poetry before in Room. Most recently, your poem “Tenderheaded” appear in issue 43.1, “Hair,” edited by Chelene Knight. In this poem, you explore the significance of hair in the Black community, starting with a moment of profound intimacy. I wonder if you could comment on this piece?

sr: I have to thank Chelene Knight for supporting that work and all that she gives to the lit community. A queen. To Black readers I don’t have any comment. We be knowin’. But for white readers it gets complicated because I, as a Black woman, live in a different world. White people exist with whiteness as normal and other as aberrant. They need to do some work among themselves before they can begin to engage effectively with the voice of Black protest. Only a white person approaching this work conscious that common does not mean right will be able to begin to digest the protein of that poem.

AM: What advice do you have for aspiring poets?

AM: Do you have any writing rituals?

sr: I use purple and sky blue gel pens. I buy them by the box.

AM: What are you working on now?

sr: The tender care and feeding of my inner demons.

stephanie roberts is a prize-winning poet and author of the poetry collection rushes from the river disappointment (McGill-Queen’s University Press May 2020). Widely published and critically praised, her work has been featured in numerous periodicals and anthologies, in Canada, the U.S., and Europe, including POETRY Magazine, Atlanta Review, Verse Daily, Quiddity, Shenandoah, Crannóg Magazine (Ireland) Burning House Press (UK), The New Quarterly (Canada), Arc Poetry Magazine, Reunion: The Dallas Review, Arcturus, The Maine Review, Room (Canada), and L’Éphémère Review to name several. In 2018, she was selected as the first place recipient in the anthology The Sixty-Four: Best Poets of 2018 by Black Mountain Press after several nominations for the Pushcart Prize  and Best of the Net.

Annick MacAskill is the author of two poetry collections, No Meeting Without Body (Gaspereau Press, 2018), nominated for the Gerald Lampert Memorial Award and shortlisted for the JM Abraham Poetry Award, and Murmurations (Gaspereau Press, 2020). Her poems have appeared in journals and anthologies across Canada and abroad, including The Stinging Fly, Versal, Arc, The Fiddlehead, Room, Canthius, Plenitude, and Best Canadian Poetry 2019. A member of Room Magazine’s editorial collection and Insomniac Press’s editorial board, she lives in Kjipuktuk (Halifax) on the traditional and unceded territory of the Mi’kmaq.