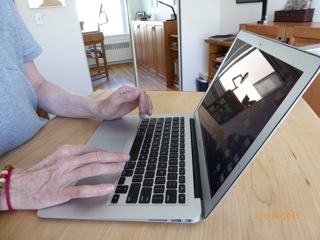 Whether it is sharpened HB pencils, inky pens or your reliable laptop, we begin to depend on our tools almost superstitiously. We talked with 5 Room writers about their preferred writing tools.

Writers’ lives hold such mystery to us. We are curious to know how a writer works, where they write, at what time of day they write. As creators, we fall into habits of production; we find tools and materials that help our process along. Whether it is sharpened HB pencils, inky pens or your reliable laptop, we begin to depend on our tools almost superstitiously. We talked with five Room writers about their preferred writing tools to get a further glimpse into how they work:

In Betsy Warland’s book, Breathing the Page: Reading the Act of Writing, she dedicates whole essays to examining specific writing tools: The Pencil, The Page, and The Computer. The author of 11 books, she says the pencil has long been her preferred writing tool. She writes her notes and first draft on a lined pad of paper inside a hard-backed folder that she was gifted by her father 50 years ago.

Trained as a visual artist, Betsy Warland is loyal to the pencil because of “its smell, the interactivity of sharpening it, watching it reduce in size and be a kind of “visual record” as we work together, how it fits perfectly in my hand, how with the turning back and forth of the point and eraser embodies Alpha and Omega/creating and obliterating.” The humble pencil can help us “sketch” out those first ideas, allow us an intimacy with our creative process as there is little to distract us from a blank page.

What the narrative requires

Betsy says that the narrative may require a change in her tools. In writing Bloodroot—Tracing the Untelling of Motherloss, Warland said “I was doing the final edits on a collection of poems when a prose narrative began to pull me into creating a new Word doc. I didn’t know what was happening but every morning I would go into my study to edit the poems but this prose would grab my attention. Then it repelled me out of my study into the sitting room to write with my folder on my lap. It was a very intense, intimate narrative that required me to stay away from my laptop and write it by hand up to 16-17 drafts before entering it on my computer. I’ve found it’s crucial to sense out then respect how each narrative wants to come into the world.”

The stroke of a key

A tool she no longer uses but enjoyed was the typewriter. “I loved its sound, smell, how it registered each user’s different finger pressure on different keys so I could identify who wrote a letter due this unintentional signature imprint: it was a touching kind of intimacy.”

Despite this love for tools of the past, Betsy still appreciates the benefits of modern technology. “My laptop and the Internet have enabled one of my most enjoyable publishing experiences ever via Oscar’s Salon that features excerpts from my MS, work from a Guest Writer or Artist and comment from readers At the stroke of a key, the reader awaits.

Ayelet Tsabari is a graduate of The Writer’s Studio at Simon Fraser University and the MFA in Creative Writing program at Guelph University, where she worked on the drafts of the stories that became her debut book, The Best Place on Earth. This year, she won the esteemed Sami Rohr Price for Jewish Literature. The trusted computer is what Ayelet depends on to write her award-winning stories.

Propped up on several books, Ayelet uses her Macbook Air when she sets out to work wherever she may be in the world. As a frequent traveller, she likes how light her writing tool is; its portability is essential. as she walks to her shared writing space and needs to pack her tools along. Before she acquired this laptop, she relied on her “good old” PC.

“I wish, romantically, that I used pen and paper more often, the way I did in my childhood, teens and early twenties,” says Ayelet. “I miss the feel of writing with a pen and the aesthetics of it, but I’m also addicted to the ease of computers and Word processors.”

Stuck on a Sentence

“I use a pen (black felt-tip) and notebooks (small, purse size) whenever I get really stuck on a sentence or a paragraph. Changing tools helps me to see it anew,” she explains. “If I’m really stuck, I try rewriting that problem sentence or paragraph while walking: it changes the scenery and it adds movement to a process that tends to be so stationary and almost body-less. I feel as though by writing in movement I can shake the sentence loose.”

Carmen Rodriguez is a prolific bilingual writer of poetry and prose, who has published numerous books including the short story collection and a body to remember with. She is also a journalist, translator, educator, and activist who appreciates the efficiency of computers in getting the job done.

Before her present laptop, Carmen used another computer , and before that computer, she used a word processor. “There is an efficiency to the computer,” she explains. “It makes my job easier (re-writing, cutting and pasting, etc.).” Though she started writing with a pen and paper, she has upgraded as technology allowed and so she is happy with her writing tools.

Typing has been Carmen’s preferred way of writing as it easy follows her train of thought, but she still uses paper and pen. “Most of the time, I write poetry using paper and pen. Writing prose is easier for me on the computer,” explains Rodriguez who has been writing in both Spanish and English since the mid-1990s.

Christa Couture is a singer-songwriter from Vancouver, BC with numerous critically acclaimed albums. She is also a creative writer, who won honourable mention in Room’s 2014 CNF Contest for her story, “Wallflower, Late Bloomer”. Ever since she received her first computer, the Apple LCII, Christa has always written on either a desktop or a laptop.

Sound of the Keys

“With a keyboard, I love the typeity type type sound of the keys, I love the speed and ease, I love that it uses both of my hands, how it requires they work in tandem,” she explains. “For a brief time, I had an old typewriter and I wish I could have it back, or find one like it. It was the ideal mix of sound, using both hands, and the texture of a page – bliss.”

After receiving a 7-year pen as a gift from a friend, Christa does most of her handwriting with this tool. “The handwriting relates mostly to the stuff I’ll never keep – passing thoughts, reflection, nattering, along with occasional lyrics that come to mind,” she explains. She also writes in multiple notebooks: “I constantly lose or misplace them and it results in rather non-linear notes and stories that require flipping through pages of two or three notebooks at a time.”

As both a creative writer and a songwriter, Christa’s process and tools change. “Between songwriting and writing the process differs, with the former being the most fluid and not actually requiring any tool most of the time–it needs only voice and memory, with possibly, or eventually, a piano or guitar, and occasionally a few key words scribbled on a page,” Christa describes. “For any other writing, I’m simple: just laptop open and feet up.”

Cecily Nicholson is poet and organizer, who works as an administrator at Gallery Gachet in Vancouver BC. She has published two collections of poetry with Talonbooks: Triage (2011), and From the Poplars (2014), which won the Dorothy Livesay Poetry Prize earlier this year. Both of which, she wrote on a trusted laptop that she owned for years.

Cecily started writing using pen and notebooks, but eventually she started to use a computer. She wrote her first two books of poetry on her beloved laptop. “Folks pooled their monies and bought me this computer for my birthday last summer. I like using a touch screen,” she explains. “I had a small, sweet-old laptop that worked well for years. I wrote two books on it.” Cecily has a desktop too but she says she can’t write on it; she loves how accessible and portable the laptop is.

“My tools are interchangeable depending on the situation,” Cecily clarifies and she has not given up on pen and paper despite her love of the laptop. “I go through note books steadily. I like to carry slight, simple ones and felt-tip pens.” Even so, she wishes she could do it more.

“I wish I had more time and less arthritis to write and draw by hand,” she says. “There are probably tools for that.”

For a further glimpse into these writer’s lives, check out our blog post on their writing rooms.