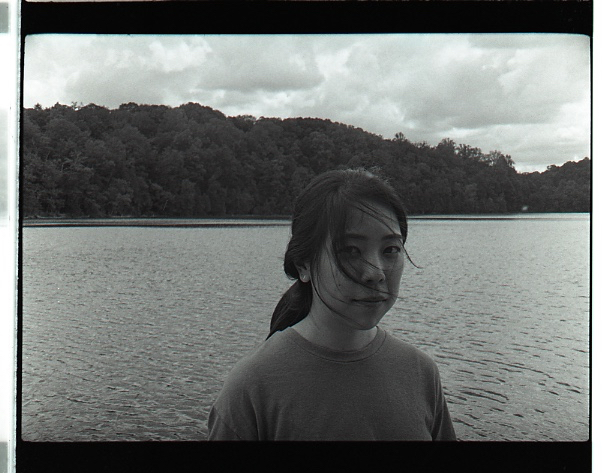 See, the living room’s TV is on. It is always on when the Tseung family is home—and sometimes even when they are out—during, before, and after meals, which are the markers the family uses to record the passing of each day.

See, the living room’s TV is on. It is always on when the Tseung family is home—and sometimes even when they are out—during, before, and after meals, which are the markers the family uses to record the passing of each day. Everyone is home now. The rice cooker is steaming. The children sit on the old grey couch, Jiějie and Mèimei sandwiching Dìdi; they all wear their pyjamas and stare at the TV. It is before a meal and the TV is on the cartoon channel playing Dìdi’s favourite show, one about boys who collect cards that turn into holographic monsters in a specially built battlefield where they fight one another for the boys’ entertainment. Dìdi collects the cards that the show sells and often takes them out along with his crayons and coloured pencils, which he pretends are the monsters as he clashes them against one another in a messy spread, making explosive noises with his mouth, his small hands whirling around him. His sisters often make fun of him, though they secretly find his play-acting endearing. Dìdi has thick black hair that grows straight up, and his sisters love to graze the palms of their hands against the ends of his hair, which is what Jiějie is doing right now as they all watch TV. Māma, who is at the dining room table with the paperwork, worries that her son is being exposed to too much violence.

Māma knows herself to be an occasionally violent person. The image of her younger daughter curled up in her bedroom closet, and the sound of her older daughter screaming, Stop it! flashes in her mind. She had found herself there, kicking Mèimei, tears running down her own face, thinking, She needs to learn. It felt very far away now and, anyway, she can’t remember the crime that had deserved the punishment. The paperwork is in front of her, on the wooden tabletop, and her husband is closed off in the back room, where there is a second TV. The Tseung family is a two-TV household, a holdover from their previous life in the city, though they are no longer able to afford rent in the city where the children can each have their own room, so they have moved to a suburban town where the children still do not have their own rooms—the daughters share a bunk bed and the son sleeps in his parents’ room—but at least there are more parks and fields for them to play in and free public schools with good teachers. Māma stares at the paperwork and is about to sign when she feels some resistance and begins to finger the clear Buddha prayer beads on her wrist.

Bàba is in the back room watching a show about U.S. Navy lawyers in the Washington metropolitan area. It is one of his favourite shows and when he watches it, he often imagines who he could have been had he been born in this beautiful country and not across the Pacific in China. He could have been a judge advocate general. He could have been rich. He could have been somebody important. He could have been married to a bright, white woman like the blond on screen. He can still be these things, he tells himself. Or, at least, he could still marry the blond woman. He is not so old yet. He wonders if his wife has signed the papers. He will miss his wife, probably, the way her thick, strong body moves from room to room. He worries that he will never love another woman, that the rest of his life’s love will be dedicated solely to his children. The worry passes, and he feels nourished by the thought; his children are everything. Then he looks at the TV, and he forgets what exactly it was he felt so nourished by and projects those feelings back onto the TV woman.

The daughters want to be TV women. Not the cartoon women, of course—the real women. There is the beautiful woman who is always the love interest. There is the woman who lives next door and likes to garden and read, and somehow, almost magically, becomes the beautiful love interest. There is the woman who is a busy doctor, who is excellent at her job, so, therefore, is her boss’ love interest. At this age, they believe that not only can they be her, but that they will be her, despite a tickling, nagging sense that it is unachievable. As they half-heartedly watch the cartoon their brother so loves, they are dreaming up their futures, futures in which they live in mansions and travel to places with names like Cyprus and Cabo San Lucas and Boca Raton, though they will later become confused about what they had dreamt up, whether the main characters in their dreams are them or other women.

Māma is no longer living her American dream. She stares at Bàba’s signed name on the papers that will end their dream together. The papers seem to speak to her now and say, You failed at building a good life here. If she failed at building a good life in this country that is so naturally full of good life, then is it she who is built for failure? It has been more than two years since they lost the shop and have been living off of savings, along with the little money Māma now gets paid for her first real job, a part-time bookkeeping position at the local grocery. Her husband has been out of work, his body shrinking as he spends more and more time alone in the back room. She begins to worry about his health, but as her anxiety builds, it leads her to the usual place, that familiar whirlpool of money worries—it’s running out, it’s running out—that seemingly endless fear that drives her survival. There is shared air in the household, and Bàba is taken by a parallel, simultaneous fear.

He is fearing life. How whenever he fails there is nothing to cushion or catch him, how he thought he’d made it, only to lose everything again. Next to Bàba is the piano, another relic, something too precious to have sold, an upright mahogany Steinway with its fallboard closed. On top of the fallboard there is a crack in the lacquer from an evening when Jiějie had gone to the back room to practice her Hanon exercises, but it was in the aftermath of a fight between Bàba and Māma, and Bàba, in his residual fury, slammed the TV remote against the closed lid, yelling, Why can’t you practice earlier? Why can’t you ever leave me alone? The pained, confused look on Jiějie’s face before she fled the room is remembered in that crack. Bàba will flee, is his answer. He will go far away. Find somewhere new and fresh. Find work. Find a different life. His plans are still bits of fog and dust, but soon they will form into something solid, a vehicle to transport him away from this place that has broken him. There is a part of him that believes he deserves his lot, that God—whatever Bàba means by God—has made his life full of hardship for a reason, like He did for Job. But Bàba is not like Job.

Like Bàba, Dìdi has in him a constant desire to escape. Dìdi has run away from home to wander the nearby streets, to hide beneath the weeping branches of the neighbourhood mulberry trees, pretending he is wild and without family. Now, he sits between his sisters, feeling the warmth of their bodies, Jiějie’s hand grazing his hair, and finds their presence both comforting and suffocating. He wants to push his sisters off him but knows he will get in trouble. He remembers the time when, out of frustration during one of his pretend monster clashes, he broke his blue plastic ruler in half, and when Mèimei found him there with a piece of ruler clutched in each of his hands, she grabbed them from him and ran out of the house. I buried the pieces, so nobody will find them, she said when she returned. Mèimei instructed him not to say a word about the broken ruler to Bàba or Māma, to say that he didn’t know anything about the ruler if they ever asked, though they never did. Dìdi feels something akin to gratitude and now wonders whether anything has sprouted from the ground where the ruler is buried.

The real trouble for the Tseung family is only beginning on this late Saturday morning. The family’s money will diminish; four of them, mother and children, will move out of this two-TV house to a much smaller apartment with no TVs; they will struggle in their own private ways and they will occasionally erupt at one another in their hot frustrations.

But none of this has happened yet, and on this Saturday morning, Bàba takes another sip of his beer and, in this story we tell ourselves, he looks outside and he sees that the grass in the small fenced yard is wild and overgrown, that some blue flowers, pretty weeds, have sprouted in the cracks of the stone walkway above that same patch of ground where Mèimei buried Dìdi’s broken ruler.

The veil is slowly lifting for Māma. She begins to understand that she cannot rely on anyone but herself. She is about to put her pen to paper and sign her name so that she can be divorced from this life that she wanted to be made around her, and she seems to take a substantial step toward learning how to fail.

And us? We will get older, learn our place in this world, our invisibility and our inability to control the situations around us. How desperately we will always try. But in this moment, we sit unaware and momentarily happy. We sit there smelling the scent of freshly cooked rice waft into the living room.

Alexandra Chang’s fiction has appeared or is forthcoming in Glimmer Train, Zoetrope: All-Story, Passages North, and 3:AM Magazine. She lives in Ithaca, N.Y., and is a graduate of the Syracuse University MFA program.
Tags: Alexandra Chang | Family Secrets | Tseung Family Shapshot