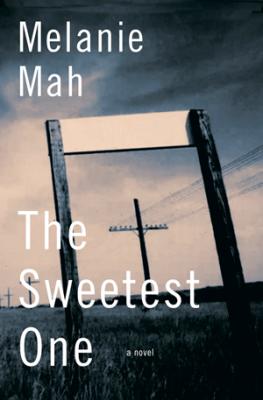 What if three of your older siblings died at age eighteen after they left town? The narrator of Mah’s first novel, Chrysler Wong, longs to leave the fictional town of Spring Hills, Alberta, but is paralyzed by her belief in a curse against her family.

The small-town coming-of-age story is hardly new terrain, but Melanie Mah’s The Sweetest One offers a unique hook: What if three of your older siblings died at age eighteen after they left town? The narrator of Mah’s first novel, Chrysler Wong, longs to leave the fictional town of Spring Hills, Alberta, but is paralyzed by her belief in a curse against her family.

When we first meet Chrysler, she is five months past her seventeenth birthday, when her last living sibling, Trina, abruptly ran away. Despite a keen interest in science and writing, Chrysler isn’t thinking about graduation or university—“I’m gonna die this year, so what’s the point?” she asks. Piling on to her fatalisitic outlook, her classmates have taken to calling her “Dead Girl.” Yet Chrysler can’t fight her natural curiosity about the wider world as she reluctantly learns to take agency over her own fate.

Mah intersperses Chrysler’s story of trying to live a normal teen life with her memories of her dead siblings, Reggie, Stef, and Gene. Each successive loss compounds the family’s suffering, driving the Wongs toward further misery. Though Chrysler does her best to enjoy what she views as the little remaining of her life, her relationship with her abusive father and withdrawn mother is strained at best. Chrysler is in stasis, her belief in the curse gradually fastening her to a life of resignation working at her parents’ store. She tamps down her desire to explore and sees “travel, leaving, [as] a kind of betrayal.”

Though the novel is ostensibly about Chrysler’s journey, the flashbacks are the true driving force. Mah slowly reveals the tragic circumstances behind each siblings’ death while Chrysler treads water, afraid to participate in teenage rites of passage like going to parties and learning to drive. Chrysler’s reluctance to be intimate with her peers, including her boyfriend, is understandable given her circumstances but slows the story’s momentum in the second half. Her hesitation and anxiety, brought on by loss, rings true, but also makes for an uneven reading experience.

Ultimately, the unfolding of the family tragedy and Chrysler’s spirited narration make the novel worthwhile. Mah convincingly portrays a family fractured by grief and isolated by the town’s barely concealed racism.

Her intriguing twist on the bildungsroman and likable protagonist makes The Sweetest One a compelling debut.

Alissa McArthur is a member of the Growing Room Collective. She holds an MA in English literature from UBC and writes and edits out of Toronto.