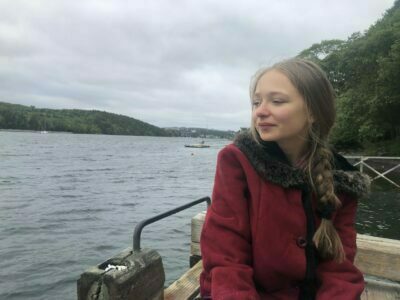 My father holds me as I cry on the couch. He raises his fist in the air and raises an eyebrow at me. “Is it that kind of day for you?’ I nod through my sobs and try not to get snot on his sweater. This is our check-in with each other each morning: him with his Lyme, me with my depression. My introverted grandfather used a code to let my extraverted grandmother know when he was running out of steam at parties: fists by his side meant he had some energy; one fist in the air, spotted across the room, meant he was running on steam; both raised above his head meant he was finished and had no energy left for socialization.

This secret code is how my father and I communicate the incommunicable nuances of our respective illnesses. I was diagnosed with depression when I was sixteen and slogging through my last year of high school. Anybody could tell you that depression is hard to communicate because of its internal nature, the way it can intertwine with your thoughts until you can no longer tell what’s you and what’s the mental illness anymore. My father, on the other hand, was diagnosed with Lyme disease a few years earlier. He’s struggled to get it under control and manage his symptoms ever since. Similar to depression, Lyme’s symptoms are difficult to communicate because of their nebulous nature: chills one minute, nausea the next, and a blanket of malaise now categorize his existence. Most days, how he’s doing is so difficult to pin down that a raised fist in the air somehow better encapsulates any complicated litany of symptoms he could describe.

In that way, my father is something of a poet: trying to make the indescribable concrete, the internal tangibly external. Before he remembered his father’s way of communicating his introvert burnout, there were scales, one to five, one to ten. On each level, there was a complex description of where one’s energy was at. These were too clunky for his disease that proves so agile and creative in how it manifests itself in the day-to-day. My father is a poet in this sense as well: he’s drawn to the streamlined, the exact. Something that often eludes him when he has a condition that defies any attempt to be concisely described.

I was in Halifax. Over Zoom, my father would try to communicate how he was feeling with little success. The new ‘normal’ way of communicating across distances proved too draining. And so, I moved home to Toronto. I told my friends it was to take care of him, to help my mom with the caregiver’s workload, but really the weight of missing them proved too much. Trying to decipher his metaphors over virtual space was too complicated. Now, I confront and try to decode his metaphors every day. Specifically, during a morning ritual we developed over the summer before I left for school. We would watch Toronto doctor Isaac Bogoch’s coverage of the COVID-19 pandemic on the seven o’clock news. My father meticulously writes down the number of cases and the number of deaths on a notepad as they change each day, next to the notebook he uses to track his symptoms. I’ll ask him how he’s doing that day, and he raises one fist, two fists, or none in response so as not to interrupt the news report. These days, my father’s understanding of his symptoms mirrors how we first understood SARS-CoV-2, the virus that causes COVID-19. He catches vague glimpses at the depths between correlation and causation, between what he did the day before or that morning that made him feel the way he feels today.

In the same way, the early days of the pandemic were fraught with experts making leaping guesses as to how the virus was transmitted, the effectiveness of masks, and when ‘this’ —an amorphous gesture at the bleak new normal as it was burgeoning—would all end. I remember in particular, imagining the infamous silent spreaders stalking through throngs of people, spraying onto them with their breath a virus we didn’t yet understand (and still don’t, not fully), much like how we don’t understand Lyme—a collection of symptoms that morph in a heartbeat from the benign to the malevolent. I couldn’t help but think about the Lyme in my father’s body as it flared up in the spring, during the first wave of the pandemic, stalking through his blood cells like an asymptomatic COVID-19 carrier, unmasked, in a tightly-packed crowd. I would think about how quickly the virus turned our world upside down, oriented our thoughts towards hand sanitizer and toilet paper stocks, just like how the Lyme in my dad’s body suddenly oriented my mother’s life and my own towards his undulating moods, unpredictable appetite, and ubiquitous aches and pains.

And it is through these reflections that the metaphors I use to think about the world have been invariably changed by how these viruses have impacted my life. But metaphors add texture to poetry: they add breadth and depth to words that previously was not there. And so as I sit on the couch each morning, asking my father how he is, tracking the ever-climbing number of COVID-19 cases in our province, I think of the new hills and valleys these viruses—hell, this year—is adding to our collective understanding of the world.

Nelly Bateman (she/her) is a student at the University of King’s College and writer based out of Halifax, Nova Scotia. Besides writing and reading, her favourite pastimes are sauntering along the boardwalk with a cup of coffee in hand, or duck-watching in the Halifax Public Gardens. Her work, which straddles the genres of lyrical essay and short fiction, has been most recently published in The Bitchin’ Kitsch and C-Heads Magazine. Feel free to follow her on Instagram @nellythebean for more of her musings.