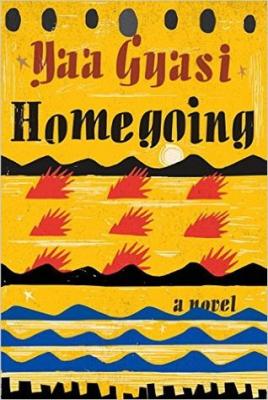 Gyasi’s debut novel, Homegoing is a timely and important contribution to literature, and to conversations about anti-black racism in popular culture . . . This novel should be read within this context, giving pause for reflection and examination on how we allowed ourselves to get here, and how we can move forward.

Once in a while a novel is written that successfully bridges contemporary world issues with historical events. Beginning in West Africa in the late eighteenth century, Yaa Gyasi’s Homegoing opens with Maame and her two daughters, Effia and Esi—both completely unaware that the other exists. Effia—born amidst a fire that surrounded her father’s compound—is married off to an English governor and slaver, assuming a life of comfort in a seaside castle. Her sister, Esi—who was born years later and known as the prettiest girl in her village—is captured, crosses the Atlantic, and is forced into a life of slavery in North America. Migration is a central theme throughout this novel; each character moves as if running from their inherited trauma and familial burden—expected reactions to generations of oppression.

Maame has bestowed each daughter with a black and golden stone pendant that gets passed down through the generations; The heirloom serves as comfort and a reminder of where each descendant originates. Effia’s great-granddaughter, Abena, was gifted the stone by her father as he blessed her decision to leave the family and her village after a series of negative events: “The next morning Abena set out for Kumasi, and when she arrived at the missionary church there, she touched the stone at her neck and said thank you to her ancestors.”

Following Maame’s descendants to the present day, each chapter reads like a snippet from the life of each of the fifteen characters. Gyasi’s ability to develop so many distinct characters is remarkable. Her descriptive yet succinct writing provokes compassion, shining a light on each character’s complexity and wholeness. In providing context of to whom and to what situation each character is born, Gyasi manages to tell stories that describe the impacts of inherited trauma—slavery, forced and chosen migration, fire, death, and loss—while staying away from stereotypes and cliché. Marjorie, a contemporary character who has moved to Alabama from Ghana with her parents, is called “white” by classmates, she was: “made aware, yet again, that here ‘white’ could be the way a person talked; ‘black,’ the music a person listened to. In Ghana you could only be what you were, what your skin announced to the world.” Gyasi excels at fleshing out the context for each character’s circumstances without offering easy answers about complicity. Each character’s surroundings and situation are fleshed out, and their relationship to the world well-written.

Gyasi’s debut novel, Homegoing is a timely and important contribution to literature, and to conversations about anti-black racism in popular culture, much like Ta-Nehisi Coates’ Between the World and Me, the documentary 13th, and movies like Moonlight and Get Out. This novel should be read within this context, giving pause for reflection and examination on how we allowed ourselves to get here, and how we can move forward.

Rachna Contractor is the reviews editor of Plentitude magazine and co-director of Unforked Salon, a monthly dining event. She completed a BA in Art History from the University of Toronto and after a decade of working in communications, Rachna moved to the hospitality industry. Rachna lives in Parkdale, Toronto.