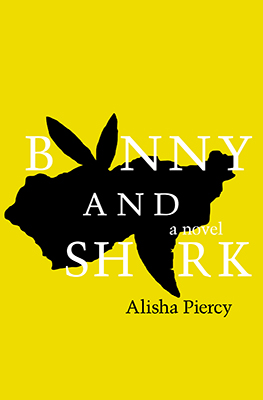 Bunny and Shark is a modern-day fable recounting the thirteen days after the novel’s heroine, Bunny—an ex-Playboy Bunny—is presumed dead when her wealthy husband, only referred to as the bastard, pushes her over a cliff in the Caribbean. The bastard wants Bunny out of the picture because she’s slowly becoming his business equal, in addition to another crime: entering middle-age.

Miraculously, Bunny is quickly saved by a circle of dolphins that whisk her to shore. Piercy writes: “From head to toe, buzzing, you are a hum, a human with the sea, not against it.” Thus begins Bunny’s transformation from a sexualized object, subject to the whims of her husband and the trappings of a culture of luxury, to a renegade, trespassing onto sailboats, seducing men in bars, and retreating to the ocean for reprieve. “The sea and salt will rub away who you are,” Piercy writes, “leaving only the Bunny interior. That’s all that will matter.”

Piercy’s use of the second person narration works to drive the fast-paced, highly implausible, dream-like plot, but otherwise can be jarring, and even unnecessary if created to elicit empathy for the main character, a Playboy Bunny losing her identity. In an interview with Lemon Hound, Piercy describes the Playboy Bunny as “a crude metaphor for how we value beauty in women above all else.” Piercy’s visceral language and violent plot twists expertly show Bunny grapple with the internalization of these standards—Bunny steals makeup, only to become a parody of herself when her face cloth reveals a “clownish mask.”

The characters don’t refer to each other, or themselves, by their real names. The heroine is only known as Bunny, a role she leverages by using her so-called “Bunny power” to lure men. For example, Bunny finds, seduces, and attacks a man who is the spitting image of her husband: “Dark, slick, perfumed. Older. Tactless, with all signs of wealth encumbering his neck and wrists, his small balletic feet in Italian leather slip-on shoes.” The bastard becomes a type just as replaceable as herself.

In the latter half of the novel, Bunny’s betrayed again—except this time by the sea—and loses one of her limbs as a result. She then sets out on a quest for revenge that’s dark, comical and hallucinatory. Piercy’s first novel (she won the bpNichol Chapbook Award in 2010) is a no-holds-barred wild ride that bestows little mercy on its characters and the culture they inhabit.